The Ancient Abyss biome appears as one of the fourth biomes in the current game. It's a beautiful biome rich with flora and fauna alike, where the walls are covered in lush vines and plant life, and the spore ridden water features a characteristic green color. Perhaps most fascinating, however, is that many creatures that were once believed to be extinct have managed to survive and prosper in this environment, together with incredible animals never before seen. The boss of the Ancient Abyss is The Sleepy Giant. 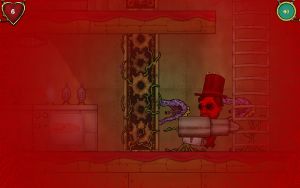 The water in this biome is loaded with spores, too much causes acid spitting plants to grow in your sub, and much like the Frozen Waters, the doors will get locked, covered in vines. The players can unlock these doors again by damaging the vines and freeing the door. Ingesting the green water has a chance to infect the player with the Ancient Flu, a deadly illness that makes the character develop nasty green protusions on their face and periodically release bursts of contagious, toxic phlegm.

A list of enemies that can be found in the Ancient Abyss biome:

At the bottom of the Ancient Abyss lies The Sleepy Giant.

This biome's civilization is the Dome Hub, a ancient egyptian city inside of a glass dome, built on top of a large jade tower, and that is populated by the archaic Egyptians.