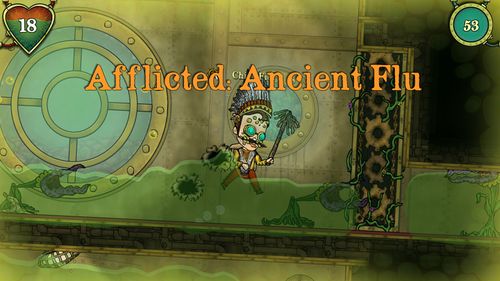 Ancient Flu is one of many Afflictions you can get in We Need To Go Deeper by ingesting water while drowning. The Ancient Flu is a deadly illness that makes the character develop nasty green protusions on their face and periodically release bursts of contagious, toxic phlegm in the form of projectiles, dealing damage and spreading the disease to anyone caught in their path.

When you contract the Ancient Flu, your character will begin periodically releasing shots of phlegm towards their front and back. Although it does not cause any direct harm to the afflicted player, any other player that is caught in the path of the phlegm shots will get damaged and infected, and should the illness not be cured swiftly, the entire crew will eventually be infected with the Flu and will constantly damage each other, possibly leading to the death of most, if not all crewmembers.

Here are the current sources you can contract Ancient Flu from: