From We Need to go Deeper Wiki
Jump to: navigation, search
This article or section may contain spoilers. You might want to avoid reading further if you don't want to spoil the surprise for yourself! 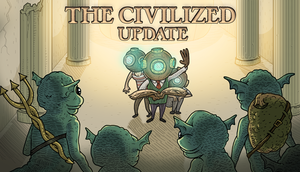 Civilizations were a feature introduced in update 0.7.2 and function similarly to caves. With the exception that instead of enemies, there are passive NPCs, as well as shops. You can interact with the NPCs to talk to them or with the shops to buy potions, upgrades or, rarely, Recruitable NPCs. There is, however, one exception to this: a fallen submarine lying deep inside the trench, the rusty grave of the first crew to ever uncover what rests in the bottom of The Living Infinite - The Nautilus.

All Civilizations, with the sole exception of The Nautilus, have a shop on them, generally at the far right of the area. Potions and Upgrades can be bought in there and rarely, one may come across a Recruitable NPC.

Prices are calculated by using the following formula: Base Price × Number of Players, and if a player has a Translation Book, the prices will be halved. The list of all base prices is the following:

Shops can also be stolen from by breaking the shop cases. This will anger all Civilization Dwellers, thus making it a very risky endeavor due to the high health and damage output they have.

Inside all Civilizations except The Nautilus, a single Doctor can also be found. These unique NPCs are wisened and sometimes powerful, and are capable of using ancient magic or medicinal skills to cure you of any Afflictions you contracted on your journey and bringing you back to full health, and, in fact, are one of the only ways of curing those illnesses. If you, however, decide to attack or steal from their civilization, they will attack the player and their crew together with their brethren, and some behave differently than their mates, possibly being much more difficult to fight and kill.