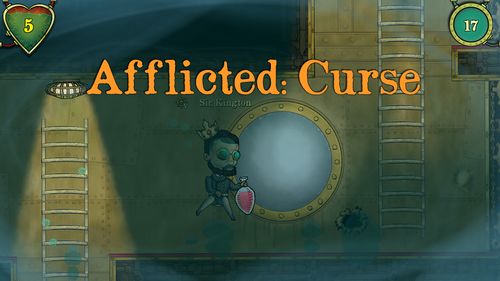 A poor soul losing his spirit due to his curse.

Curse is one of many Afflictions you can get in We Need To Go Deeper by ingesting water while drowning.

When you contract Curse, nothing immediate happens. However, if you happen to die while cursed, a Ghost Player, which is the cursed soul of your character, will appear and begin to attack anyone they see, making it much more difficult to resurrect you.

Here are the current sources you can contract Curse from:

The Ghost Player is a rare enemy that appears after a player infected with Curse dies.

The Ghost Player is the cursed soul of a dead player that had been cursed by the ingestion of the unholy water of the biome. They are no longer able to control themselves and will be forced to attack their crewmates, but can be "killed" to release them from the control of their curse.

The Ghost Player will chase any crewmembers it spots and attack them until it is "killed". Although not particularly dangerous, it is able to follow it's target wherever they go due to it's ability to float, which can make it a big threat to players with low health. Due to it generally only appearing when the crew is in turmoil (as a crewmember has to get cursed and die for it to spawn), the Ghost Player can be the last nail in the coffin of the expedition.