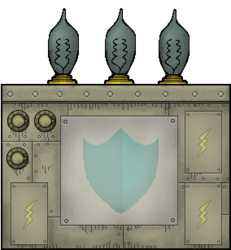 The Shield Console, when powered, will generate a shield, which will absorb damage once before needing to recharge, reducing the damage dealt by enemies and possibly even nullifying it. Multiple energy points will increase the recharge rate of the shields and will allow the shield to charge more, acquiring a purple color and increasing its size once charged, allowing it to absorb much more damage and even completely block most enemy attacks as well as lasting much longer. It can be upgraded to reduce the time it takes to recharge, and the Perle begins with one of that update. Additionally, the Espadon and the Requin lack the Shield Console, making them more vulnerable.

Some enemies, however, are able to pierce through shields, such as all latchers, as well as the Killer Clownfish and the Blobfish.

In biomes that have enemies that can deal a very high amount of damage per attack and are blocked by shields (such as the Cursed Waters), having at least 1 power to shields is advisable, as to avoid taking avoidable damage.

Due to the enemy spawn rate being reduced if the submarine is not moving, a strategy to survive in tough situations is removing all power from the Engine Console and allocating it to the shields, while the ship is being repaired or the crew is disposing of enemy invaders.