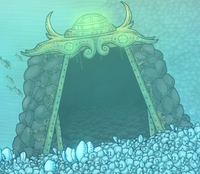 An Undersea Lair in the Frozen Waters

Underwater Lairs are located randomly throughout your map, and are able to be entered by steering your sub into the Lair. Once inside you can disembark through the hatch located in your submarine. Undersea Lairs have multiple possible layouts. Inside you'll find a Boss whose defeat may yield great rewards, or only lead you to your inevitable doom!

The Undersea Lair is a large abandoned cave turned into an workshop, which contains The Lair Guardian. Multiple schematics, tools and robot parts can be found scattered in its large, open interior, and multiple long metal chains hang from the ceiling, often holding gas lamps, constantly releasing a steady light that illuminates the interior of the Lair.

The Lair Guardian is a huge robot that guards the lair where it was created. Some Relics give an insight on who was responsible for its creation, and some hints about what it is truly made out of.

The Loot that can be found in the Undersea Lair.

Crates are dropped by the boss of the Undersea Lairs and will contain a random Upgrade. There are 3 categories of upgrades:

Lootable Bodies are the remains of deceased explorers and divers that met their ends inside the Caves and Lairs of The Living Infinite. Even after death, their skeletons are still holding tightly to the tools and weapons they possessed when they were alive, and whoever finds them can take it and put them to better use.

If the player is already carrying an item or has a Backpack and is carrying two, they will drop the one they are currently holding in their hands to pick up the Body's item.